Now reading: "A new exhibition will help injured servicemen get back on their feet." - GQ
Share
PrevNext

It was in December 2008 that British shirt maker Emma Willis started visiting the Headley Court Military Rehabilitation hospital in Surrey. It was here that Willis - who opened her first standalone store on Jermyn street in 1999 and is best known for her immaculately-crafted shirts, boxer shorts and dressing gowns - began to fit wounded servicemen for bespoke Emma Willis shirts.

What started out as a small gesture has, in 10 short years, transformed into charity Style for Soldiers, which takes public donations in order to enable Willis to continue making beautiful bespoke shirts and hand-carved walking sticks for severely injured soldiers.

Willis's idea is that her clothes will better enable the former soldiers stand out in civilian interviews. It's an important point, as the majority of the men on the charity's database are medically discharged from the army early, due to the severity of their wounds, and they need to find paying work relatively quickly. 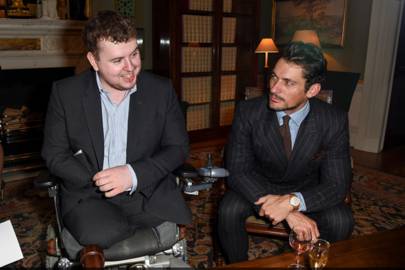 Later this year, on November 4, Willis will be mounting a Style for Soldiers exhibition Art in the Aftermath at La Galleria on Pallmall. The show will feature paintings, poems and plays produced over the past 10 years by some of the 700 injured servicemen on the Style for Soldiers database - none of whom wrote or painted prior to incurring their injuries.

"I learnt that many were painting, writing poetry and plays to help manage the PTSD which was starting to emerge due to the traumatising violence so many had witnessed at such young ages, in such hostile environments, so far from home." Says Willis. "The quality of work is extraordinary."

"I forwarded a play I received, written by a soldier who served in the Special Forces, to Sir Tom Stoppard." Says Willis. "He replied: 'I read the play. It held my attention and my sympathies, you were quite right to send it, thank you.' She continues." Charles Dance was so impressed with former Royal Engineer Bomb Disposal expert Matt Weston who lost three limbs on an operation in Helmand, that he acted in his first short film ' For Love of Words' which will be shown at the November exhibition and attended by Dance himself."

What with this year being the centenary of the end of the First World War, Willis' exhibition carries even more potency. Art in the Aftermath opens at La Galleria on Pallmall on November 4, 2018 and will run until November 18.

Painters Online: Art In The Aftermath